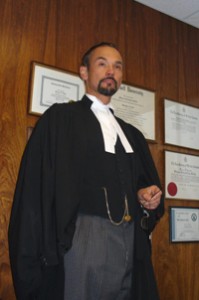 A lawyer since 1981, a mediator since 1997 and an arbitrator, Michael Welsh grew up in Summerland and has strong roots in the Okanagan Valley.

He has been a partner in law firms in Vancouver, the Sunshine Coast and Okanagan Valley. He has extensive courtroom experience in many areas of law, from the most serious criminal law cases for both defence and prosecution, to personal injury claims, complex family problems and a wide range of other civil litigation. He has appeared before the Supreme Court of Canada.

Michael Welsh is a Qualified Mediator, Qualified Arbitrator and a Certified Family Arbitrator, certified by the Law Society of British Columbia to conduct family arbitration and mediation. He is a regular author of articles in legal and dispute resolution journals and is past Chair of the Editorial Board of BarTalk, a major legal publication in BC published by the Canadian Bar Association BC Branch.

Recognized by the profession, he currently serves as:

Mr. Welsh has frequently lectured at continuing education programs for lawyers. As a lawyer, he has the ability to listen carefully and grasp a problem, then build a strong case for his clients. He is listened to by judges. As an arbitrator and mediator he has successfully assisted many parties in legal disputes to find an accepted resolution to those problems.

In 2017 Mr. Welsh was recognized by the Province of British Columbia with the Queen’s Counsel designation, the profession’s highest honour.

Some judicial comments are as follows:

Chief Judge Stansfield of the Provincial Court of British Columbia:
“In his characteristically persuasive submissions, Mr. Welsh urges me to consider that public safety will be assured most decidedly if [his client] can be motivated and supported and encouraged to address his alcohol problem and if he is bound by court orders, which it appear have been successful in the past, to refrain from driving and to abstain from the consumption of alcohol [which] in Mr. Welsh’s submission should be served as a conditional sentence.”

“In answer to that Mr. Welsh argues, sensibly and persuasively, that no matter what might be the nature of the proceeding there still need to be some rules of evidence or the integrity of the court’s process is in serious jeopardy… I agree with Mr. Welsh on that latter submission.”

Judge Giroday of the Provincial Court of British Columbia
“With respect to count three, the refusal [to provide a breath sample], I agree — with what may be a somewhat idiosyncratic interpretation of section 254(2), but I agree with [Mr. Welsh] that it is sufficient for the officer’s demand that he suspects a person to have alcohol in the person’s body, but that person as a prerequisite must have been found operating a motor vehicle or having care or control of it. It is an interesting wording in that in some way it makes the test more onerous than the requirements for a breath test, and I am sure that was not the intention, but that is my reading as well… I am left in doubt and [the defendant] is entitled to and has an acquittal.”

Mr. Justice Macfarlane of the British Columbia Court of Appeal:
“Mr. Welsh submitted that the Crown’s theory [of the murder], that [his client] administered a drug and stupefied [the victim] is rank, unadulterated speculation. …There is no evidence of drugs missing from the hospital. This is, according to Mr. Welsh, a huge gap in the Crown puzzle …In my opinion, the evidence that [his client] had access to drugs, and the theory that she may have used them to cause the death of [the victim], was of little or no probative value and was highly prejudicial to the defence. The evidence ought not to have been admitted.”

Mr. Justice Groberman of the British Columbia Court of Appeal:

There is considerable force in [Mr. Welsh’s] observation that evidence of past alcohol abuse in this case is very limited …The demonstrated nexus, then, between this accused’s criminal record and alcohol consumption is a weak one.”

Chief Justice Nemetz of the British Columbia Court of Appeal

“Mr. Welsh, for the appellants, at first asked that we “direct” the legislature to enact provisions for absentee voting. …In our view it would be “appropriate and just in the circumstances” to declare …that in the court’s view the right to vote as guaranteed by s. 3 of the Charter is denied to British Columbia registered voters where the sole reason they are unable to exercise their right to vote is that no procedural mechanism exists which would reasonably enable them to do so.”

Mr. Justice Thackeray of the Supreme Court of British Columbia:
“This [personal injury] case has been, in my opinion, well presented…  It has been well presented by Mr. Welsh on behalf of the plaintiff He reviewed the evidence from the plaintiff, the medical reports, and other supporting documents and evidence.  As well, he made an articulate submission as to damages.”

On his opinions in legal journals:

Mr. Justice Bouck of the Supreme Court of British Columbia:

“The question then arises as to what was the intended purpose of [the summary trial rule] when first enacted?  From counsel’s perspective, two articles published in The Advocate speak positively about Rule 18A’s usefulness:  M. F. Welsh:  “Judging the Summary Trial Rule” (1988) 44 The Advocate, 173; D. W. Roberts Q.C., “Rule 18A Summary Trials – Under Attack Again”, (1992) 50 The Advocate, 49.
In Mr. Welsh‘s words, [it was] hoped the Rule would, “weed out those cases that do not (or should not) require a full scale trial.”

Madam Justice Dillon of the Supreme Court of British Columbia:
“Although there are cases which suggest that the court should grant an order as a matter of course after property is linked to the subject matter of the action.
(See M. Welsh, “Can Property Be Preserved? (A Comment on Rule 46)“, (1997), 55 The Advocate 65)”

Right now racism is fostered by the POTUS. To quote him - sad. In fact, tragic.

But will they be as funny any more?

Law Society of BC@LawSocietyofBC·
20 May

Cheryl D’Sa has been elected a Bencher in the May 20, 2020 by-election for Vancouver county. See the full announcement here: https://t.co/ZFl4FEVtLC

You can't make this stuff up. So she doesn't. The pure unadulterated s***. Hilarious.

Given enough time I may try them all!

Reply on TwitterRetweet on TwitterLike on Twitter2Twitter
Load More...